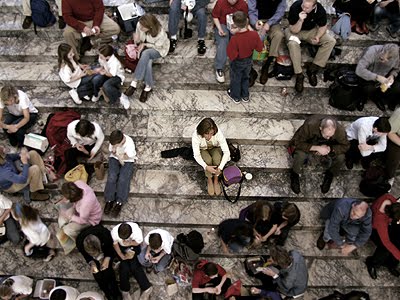 I think I’m getting worse at knowing people. What I mean is, I used to be able to ask new acquaintances endless questions about themselves. This is because I have good parents who are good at asking people questions, so I learned this from them. I’m still more of an asker and listener than a talker, but I remember after my first year out of college realizing this had gotten more difficult for me; it took more energy to keep asking questions. I blamed this on the fact I was living in England and people are less nosy about other people there in general. But I notice it still. It is much easier to not ask someone about her story, to just let it be and keep talking about the weather.

I wonder if we get weary of this because we’ve heard all of the sad answers by now. When you enter into the great big world, you ask a stranger a question and you hear about his heartache and abuse and sadness and failures and, well, it would just be easier to not hear those things. I wonder also if we get more consumed by our own heartaches, failures and sadnesses and feel we don’t have room to know anyone else’s.

I actually have to muster up physical energy at times now when I dig into someone’s story, whereas when I was younger, it felt effortless.

And I’ve felt ashamed of this. Do I not care about people anymore? What is this wall that has so suddenly grown up between me and humanity? Where did it come from and how do I knock it down?

I’m not sure how, but I am sure how to keep the wall there, strong and steady. Stop getting to know people. Just stop. We could all agree to coexist and walk side by side without facing each other, looking each other in the eye and asking, “how are you?” Because we’ve heard the answer too many times.

If this sounds remotely appealing to you, you’re not alone. I’ve thought this before. Like when I was hiking with a friend this weekend. She’s been divorced for  a few years but I had never asked her much about the details of the divorce. How it felt, how it hurt, how it even happened, logistics wise. I thought about not asking her these things and staying away from the details and safe on the surface, but I mustered the energy somehow and as we walked through tress and crunched branches with our feet, I dug into her story. And the walk felt surprisingly refreshing and the questions came easier as I allowed myself to ask them. And we know each other better now.

Being known is a desire at the core of us all and though only God knows us fully, I believe he gave us the gift of conversation and each other so we could subsist on a taste of being slightly known while here on this earth. To get a glimpse of what being wholly known could be like. And when I think of it this way, the dangers of asking a friend about herself and getting to know her better is still scary, vulnerable and hard work but it becomes worthwhile work. Because I know I’m chipping away at the wall to reveal a path between us, and the path looks a little like eternity.

3 thoughts on “The Risk of Getting to Know People”